Priming can cause us to unconsciously engage in behaviors both good and bad.

Priming, in relation to human behavior, is the idea that exposure to an external stimulus can subconsciously trigger our brains to drive specific behaviors.

A study in Daniel Kahneman’s “Thinking Fast and Slow” examined how a simple word could prime the brain to think differently in a similar situation. Subjects were exposed to one of two words and then shown the letters “SO_P” and asked to fill in the blank.

In this situation, the first word they were exposed to impacted their interpretation of the blank letter and completed word. This is a simple example, but priming can also cause us to unconsciously engage in behaviors both good and bad.

Let’s looks at some examples in the real world.

Last summer I was driving down interstate 95 in Maine on my way from Portland to see my parents in Massachusetts. For the non-New-Englanders out there, i95 is a busy ‘summah’ route for vacationers heading to enjoy the beaches, camping, and ‘lobstah’ of “vacationland”.

On my drive I noticed some new roadside highway patrol signs – the lit up construction style ones that warn of traffic, an accident, or an important message. As it came within reading distance, the sign’s bright orange letters displayed an odd message: “Pick up the Phone”.

What do you think my instinctive reaction was? Without consciously deciding to I reached to the passenger seat and grabbed my phone. The message had subconsciously primed me to do so.

At that moment, after far too long, the sign changed to a new message “Pick up a ticket”. Now I consciously understood the message, but the damage was done.

What was intended to be a good message was turned into a “bad prime” because this particular sign did not have enough room to show the entire message at once. While I do not have a study on this one, I am willing to bet that these signs unintentionally prompted more drivers, like me, to reach for there phone when they otherwise may not have – even if just for a moment.

Had the Maine DOT considered the behavioral implications of communications, they may have gone a different route. Even as a complete message, it still holds the risk of a bad prime given that the first part of the message is a direct call to action to perform the action that it is intended to stop. Were we to design this messaging, it may look more like this:

The first message is directive of the positive action (the prime). This message would work on either the complete sign or as a split message on the smaller sign. The sad face also subconsciously triggers the emotions related to a ticket.

As an avid skier and “all things mountain” enthusiast – poor backcountry choices, exposure, and avalanches can mean the difference between a rewarding day and life and limb.

If you are interested in the subject, you can check out my write-up about the behaviors at play in the backcountry here or listen to our podcast episode on it here. If not, the quick and dirty is this: in high-risk environments, we can easily succumb to poor decision making. Even when highly educated and experienced it is easy to surrender to the allure of fresh powder despite high avalanche risk, or the reward of a new summit despite a rapidly approaching storm.

Jones snowboards is a Truckee California based snowboard company started by professional snowboarder and mountain legend Jeremy Jones. They have many products designed specifically for backcountry exploration.

Last winter, some friends, my girlfriend, and I were exploring the Wasatch backcountry in Utah. It was a beautiful, low-risk, sunny day. My girlfriend was new to backcountry boarding and had rented a Jones split board to see if she enjoyed it. As we were setting up her board, I noticed a graphic. It was placed right in the line of vision as you set the up board for climbing and again as you prepare it for the descent. 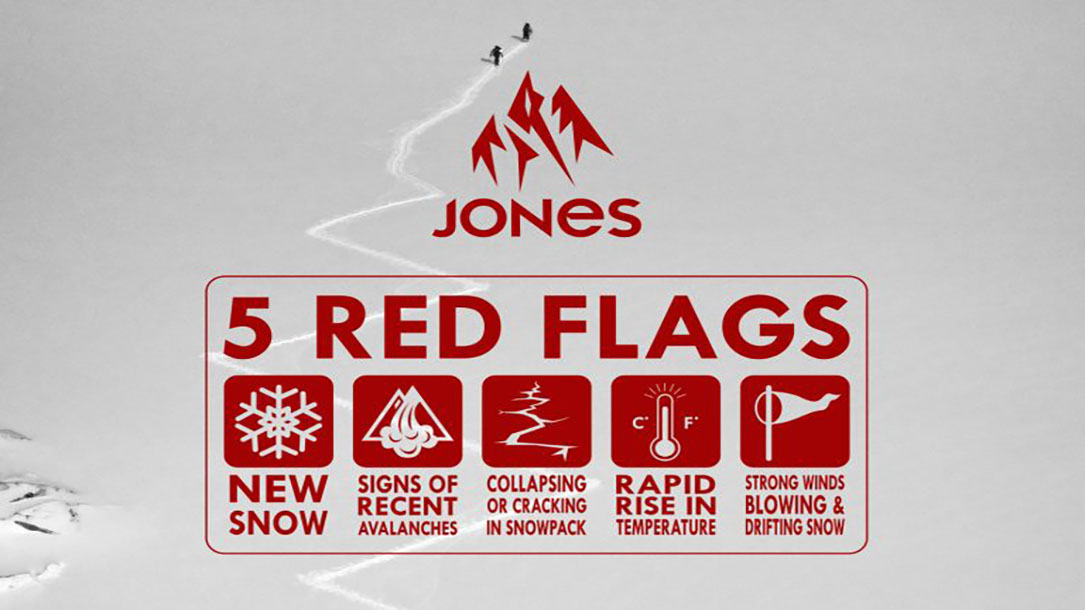 The graphic, the “5 Red flags” of avalanches was simple and easy to interpret immediately. Right there, in your face, as you are beginning to make the most important decisions of your day was a fantastic reminder of some key environmental factors to look for to have a safe and successful day. This simple but great reminder is a fantastic example of priming.

It may seem minimal, but I am willing to bet this graphic has helped save lives. You need to be in the right mental state to make these decisions and Jones’ had cleverly added this subtle prime to remind you in that pivotal moment, where emotion takes over, that these warning signs could get you killed. This helps overpower the emotion and prime rational decision making.

Subtle priming acts may not magically change the course of your actions, but they can plant a seed that drives your behaviors for the better or worse.

With this in mind – are you priming good or bad behaviors in both your life and work?